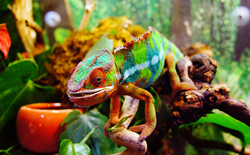 Changing who you are in order to make someone else happy could mean losing your identity and what makes you special.

Ralph Waldo Emerson believed that the greatest accomplishment is “to be yourself in a world that is constantly trying to make you something else.” True enough, given that people are constantly plagued by advertisements implying that they are simply not good enough – at least, not until they buy the latest facial cream, fat-free food, car model, or whatever the latest “perfect” celebrity is peddling. In a desperate effort to be accepted and to belong, many people will change the very core of who they are in order to please others. Evidently, this comes at a significant emotional cost.

Analyzing data collected from 12,259 people who took the Emotional Intelligence Test, PsychTests’ researchers compared people who readily change themselves – their appearance, beliefs, preferences, and behavior – in order to please others (“Chameleons”) and those who won’t (“Authentics”).

Here’s what the study revealed:

> 43% don’t consider themselves special, exceptional, or interesting in any way (compared to 6% of Authentics).

> 58% find it difficult to accept compliments (compared to 24% of Authentics).

> 62% frequently and harshly criticize themselves (compared to 10% of Authentics).

> 72% desperately want to be liked by everyone they meet (compared to 27% of Authentics).

> 55% don’t feel confident about a decision unless others approve it (compared to 9% of Authentics).

> 51% are not satisfied with an achievement or a job well done unless someone else praises it (compared to 6% of Authentics).

> 54% indicated that they are never satisfied with what they have achieved (compared to 16% of Authentics).

CHAMELEONS ARE UNASSERTIVE, AND HAVE A HARD TIME SAYING “NO”

> 64% pretend to agree with someone’s opinion in order to prevent disagreements (compared to 15% of Authentics).

> 71% won’t ask for what they want, even when they feel they deserve it (compared to 27% of Authentics).

> 64% are entirely conflict-avoidant (compared to 23% of Authentics).

> 69% consistently put others’ needs ahead of their own, even when doing so leaves them uncomfortable, angry, or resentful (compared to 32% of Authentics).

> 72% apologize even when they know they haven’t done anything wrong (compared to 25% of Authentics).

> 51% have adopted certain beliefs simply because it’s what their family or friends believe (compared to 17% of Authentics).

> 50% feel their life lacks purpose (compared to 7% of Authentics).

> 39% ignore their gut feelings and intuition (compared to 19% of Authentics).

“When you change who you are in order to become the person you think others want you to be, you surrender your sense of self. Consequently, you are left feeling lost, empty, purposeless, and most importantly, unhappy,” explains Dr. Ilona Jerabek, president of PsychTests. “This is because everything that defined you – your beliefs, values, preferences, and even the way you dress and behave is cast aside. In its place is a persona, built according to someone else’s specifications, like a robot. At first, you may think you’re happy with this new and ‘better’ you. You’re fitting in, you’re more popular, people like you and talk to you more. But this won’t last long – and it’s exhausting. When you are not being true to yourself or to the kind of life you want to live, it is only a matter of time until you start feeling depressed, hopeless, and aimless.”

“I am a strong proponent of self-improvement,” continues Dr. Jerabek. “Choosing to break a bad habit, to stop a pattern of unhealthy behaviors or thinking processes, to take control of your life, and to nurture yourself is commendable. Changing because you want to change, because you want to live a better life is a healthy goal. Changing yourself in order to make someone else happy is not. This is why I strongly advise people to regularly engage in some introspection and take stock of their lives. Are you happy with the way you have been living your life? Do your values, beliefs, and goals truly represent who you are and what you want? Are you being true to yourself? If the answer to any of these questions is ‘no’, then it’s time to cast aside the persona and start being the real you. Some people may not like it but that’s okay. The right people will gravitate to your authentic self and replace those who cannot accept you just the way you are.”

Want to assess your EQ? Check out our the Emotional Intelligence Test at https://testyourself.psychtests.com/testid/3979

Professional users, such as HR managers, coaches, and therapists, can request a free demo for this or other assessments from ARCH Profile’s extensive battery: http://hrtests.archprofile.com/testdrive_gen_1

PsychTests AIM Inc. originally appeared on the internet scene in 1996. Since its inception, it has become a pre-eminent provider of psychological assessment products and services to human resource personnel, therapists and coaches, academics, researchers and a host of other professionals around the world. PsychTests AIM Inc. staff is comprised of a dedicated team of psychologists, test developers, researchers, statisticians, writers, and artificial intelligence experts (see ARCHProfile.com).

This is a syndicated feed. Mental Health Post is not responsible for any claims made in this story.

You may have missed

Can hypnotherapy help me overcome my vices?

AskSid – the digital assistant of choice for Danone Nutricia, the world leader in early life nutrition